I’m not quite sure why I’m writing this blog.  I’m not into social media at all.  I’m not even on FaceBook! I’ll start by telling you a little bit about myself, for those who don’t know me.  I’m 38 years old and married with two beautiful children; a six year old daughter who started prep this year and a one year old son who is, like most one year old boys, busy!.  I’m a forensic pathologist and up until recently was working full time in the city I live about an hour away from.  Life was pretty hectic.  I was juggling the demands of a young family and a full time job (with a husband who also worked full time in the city), and was probably not doing a particularly good job of either.  Something had to give. 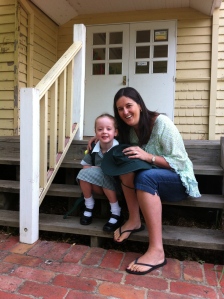 My one year old dude.

In July this year, I was diagnosed with Hodgkin’s lymphoma.  Obviously that is the main reason for this blog; to document my adventure (I don’t like the word journey, it’s used too much on all those reality shows, so I’m calling this an adventure).   So why is a person who is not even on FaceBook doing a blog?  If I think about it there are several reasons.

I was probably inspired to write this blog by my beautiful, courageous friend, Lisey.  We went to primary school and high school together, lost touch after high school and reconnected last year at our 20 year reunion.  She was diagnosed with breast cancer in January this year.  I made a few trips to her home town earlier this year.  She lives quite a distance from me, but as luck would have it we do a bit of work at her local hospital.  After initially refusing to participate in the ‘country roster’ because it was too far away (and I was expressing for my son at the time), I put my hand up to go.   Lisa and I managed to catch up for lunch and it was great…..although she paid and I am still very embarrassed about that!  She had only recently been diagnosed with cancer and her attitude was amazing.   We laughed like school girls and I remember commenting to a mutual friend (that’s you Ev, you’ve scored a mention in my first post) that it was like we’d never lost touch for those twenty years.   Lisa told me what was in store for her and we joked that she’d probably get through the months of treatment ahead, be given the all clear and then walk out of the doctors office and get hit by a truck.  We have a similar sense of humour. 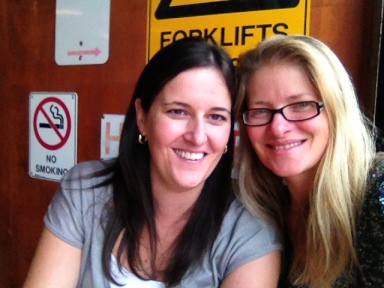 Two girls with cancer in their thirties. One knew, one didn’t. Taken by the Queen of selfies! Lisa wonders if it was our long hair that gave us cancer.

Lisa has documented her journey (yes, she called it a journey) in a truly inspirational blog which you can find at http://www.shittytittiebangbang.com (awesome name for a blog!).  I signed up to Lisa’s blog from the start and have loved reading her posts so hopefully someone out there will love reading mine.  I must make one thing clear though.  I am not doing this blog to compete with Lisa.  She wins hands down!  We were very competitive in primary school, both pretty fast runners and we took it in turns beating each other (although she probably won more times).  The competitiveness waned a bit in high school but it seems it started up again in adulthood when we got cancer in the same year, but she got it first (or found it first) so she wins again!  It’s been a bit of a running joke between us about who is the winner on this cancer journey/adventure.  Unlike primary school where each of us wanted to be the winner, it seems we have now matured and are adamant the other one is the winner.

Lisa was one of the first people I told that I had cancer, via email as I didn’t want to talk to anyone, and she has been a bigger support to me than I’m sure she knows.  She has encouraged me, empathised with me and supported me, but most importantly she has made me laugh.  I think that started the day I told her I had cancer when she decided we should call ourselves Kylie and Delta.  We joked about the reason both of us got cancer in the same year, in our thirties.  Was there something in the water at that primary school?  Was it that ridiculous red rooster slide (a piece of play equipment in the play ground)?  It’s gone now so the children are safe.  The conversations we have now are priceless.  Just today, we were texting about pubic hair.  I wish I had been the one to get cancer first, so I could be there for Lisa like she has been there for me.  And so I could win!

In her post entitled ‘Just call us Kylie and Delta’, which you can read about here (I will be so impressed if that link works!), she is right on the money with everything she says, of course, because she has been where I am about to go.  She says “you will be surprised at the people that will be there for you and the ones that aren’t”.  So very, very true.  I am actually gobsmacked rather than surprised; almost moved to tears by the generosity of some people, like the school mum who dropped a voucher for a massage in my letterbox, the non-stop offers of play dates so my daughter doesn’t have to see me sick, the meals that have been cooked for my family, the ‘cancer show bags’ friends have thoughtfully put together for me, cards from people I haven’t seen in years, my mum virtually moving in when I am incapable of looking after my children for a few days after chemotherapy, my sister dropping everything when I’m having a bad day (there’s only been one really bad day) and offering to dry and straighten my hair (when I had it) because I just couldn’t be bothered.  I have also been really hurt and confused by the people I thought I was close to who haven’t bothered to contact me for over a month.

Lisa also says “you will learn to laugh at the stupid things people say or believe about why you got cancer, or how you got the “good cancer”.  Also very, very true and another reason for doing this blog and in fact, the inspiration for the name of this blog.  People who know me will know that the title “I Got The Good Cancer”, is me being sarcastic.  I did not get a good cancer.  There is no such thing as a good cancer.  Well OK, a little basal cell carcinoma of the skin could be good.  If I had $1 for every person who told me I got a good cancer, or even THE BEST cancer, I’d be quite well off.  Saying that to someone with cancer is not helpful, so another reason for doing this blog is a bit of education.  I think people feel the need to say something positive to people with cancer, and I understand that.  I’m guilty of it myself.  I’m pretty sure I told Lisa it was good that her cancer was only in one lymph node.  That’s not good.  It’s shit!  Good would have been cancer in no lymph nodes, or no cancer at all.  What I meant was that cancer in one lymph node is better than having it in twenty, but that doesn’t make it good.  I now know that is not a helpful thing to say.  So I am not trying to insult or degrade you if you have made these comments, although I probably already have, but I just want you to know it is not helpful.  I know that you are trying to say there are worse cancers, and it is true there are worse cancers.  But that doesn’t make any cancer a good cancer.  Since being diagnosed with cancer I have met many other people with cancer and we have all been told we have a good cancer and we all find it annoying!  Yes, Hodgkin’s lymphoma has a good prognosis but that does not make it a good cancer.  It is certainly not the cancer I would choose if I had to have cancer and got to choose which one I could have.  Hopefully by the end of this blog, or even before then, you will agree with me.   I haven’t heard any theories about why I got cancer.  I’m sure people have them but I am blissfully unaware of what they think.  I have never questioned why I got cancer.  My theory is that shit happens.  In my line of work, I see that a lot.

Oh, one other thing.  Please don’t tell someone with cancer you will do anything to help when really you can’t or you have no intention of doing anything.  I do not expect or even need help from every person I know.  I understand people are busy with their own lives and worries and the world doesn’t revolve around me and my cancer diagnosis.  Sometimes I think people say that just to make themselves feel better; they’ve offered to help the chick with cancer.  Job done.   It’s funny…..it’s mostly the people who have gone over the top and told me they’ll be with me every step of the way that have actually done nothing and I haven’t heard from them again.  So if you want to piss me off, tell me I’ve got a good cancer and you’ll do absolutely anything for me.  If you want my respect, tell me it’s shit I’ve got cancer and you’d love to help but you’ve got a bit going on right now and you just don’t have the time.

What will follow is a multitude of posts documenting my adventure through Hodgkin’s lymphoma.  For those who don’t know me, I hope you enjoy getting to know me.  For those who do know me, or think they do, I hope you enjoy getting to know me even better.  To Lisa, I say a huge, heartfelt thank you.  Thank you for getting cancer before me, but seriously, you shouldn’t have!  Bring on that joint pity party I say.  If we wait long enough, it could even be a joint remission party!  Lisa has been on my back for ages to get on FaceBook so I might just have to do that for her.

I apologise in advance as I will probably write too much so I hope it doesn’t bore you.  I always had trouble sticking to word limits at school.  As I write this post, I am (based on the current plan) one third of the way through treatment and just over two months since I was diagnosed, so there is a lot of catching up to do.  So far, I can say it is shit, it is not fun and it is certainly not good.  But I will get through the treatment, as many people have before me, and there will be some positives.  I still laugh, I still have a sense of humour and I still have good times, in fact, many more good times than bad.  It’s life changing, not just for me, but for everyone around me.  Despite the many downsides, I really do believe that at the end of this, I will say “I’m glad I got cancer”…………”but it wasn’t a good one”.