Don’t worry, you won’t need tissues for this one.

I hadn’t told my six year old daughter that I might have cancer.  I wanted to wait until it was 100% confirmed until I said anything to her.  She didn’t know I’d been to hospital for a lymph node biopsy.  She just thought I’d gone to work that day.  I was doing my best to hide my surgical dressing from her but she saw it on Friday night and asked me what it was.  The diagnosis had been unofficially confirmed that day but my husband and I didn’t think it was a good idea to tell her before she went to bed so I made something up.  I can’t even remember what I said now. The next morning, I told her.  I wasn’t looking forward to it but it really wasn’t as difficult as I anticipated it would be.  She was sitting on the bed with my husband.  I sat down and said I had something to tell her.  I told her I was a bit sick and she looked at me confused because I didn’t look sick.  Then I told her I had cancer.  I think her response to that was “what the?”

It was the last weekend of the school holidays and on the last day of the previous term, just over two weeks ago, her school had a ‘tracky dacks’ day where all the students got to wear tracksuit pants to school and made a gold coin donation to raise money for cancer research.  She had heard the word cancer.  Some of the older students had spoken to the preps to explain what ‘tracky dacks’ was for and what cancer was.  I also had a bit of a chat to her at the time about what cancer was.

I then said this: “There are good cancers and bad cancers and I’ve got a good cancer”.  Yes, it’s true.  I told her I had a good cancer.  I don’t think that’s such a bad thing to say to a six year old who can’t possibly really understand what cancer is.  But just to clarify, I don’t really think I have a good cancer.

I then told her I’d be having some special medicine for the next few months and it would make me sick and would make my hair fall out.  She thought it was quite hilarious that my hair was going to fall out and she decided then that I should wear wigs and that she should help me choose them.  She said “I don’t want you to have cancer” so I told her that there would be some good things about it (still doesn’t make it a good cancer!).  I probably wouldn’t be going back to work for a while so I’d be around for more school drop offs and pick ups and could help out with more things at school.  I’d be home more and we’d able to spend a lot more time together.  She thought that was great! That was pretty much all there was to it.  I think we started talking about something else after that.  The innocence and resilience of children always makes me smile.

In the first few days when I was having all those horrible thoughts about dying, I had to be happy when my children were around, so it was good when they were there.  I couldn’t let them see me crying so when they were around I just couldn’t think about bad things.  And they do give you a pretty good reason to live.

It is impossible to be down around my daughter anyway.  She is, as my husband and I always tell her, a complete nutbag!  She constantly makes us laugh.  Not long after I’d told her I had cancer, while we were still sitting on the bed, she handed me a balloon and asked me to start blowing it up for her.  She then quickly snatched it back and said, “oh, you have cancer”.  I laughed and explained she couldn’t catch it from me.

Another time I was in a supermarket with her.  She was sitting in the trolley and we were in the fruit and veg section when she announced quite loudly “Oh, I forgot you had cancer and then I saw that thing on your neck (she was referring to the dressing) and I remembered you have cancer”.

There is also the time when I dropped her at before school care.  I was dressed casually as I wasn’t going to work that day.  The lady who runs the program asked if I was going to work or had a day off.  My daughter answered for me; “No, she’s not going to work.  She’s got cancer!”.  I couldn’t help but laugh and this lady, who loves a chat, was speechless for at least 10 seconds. 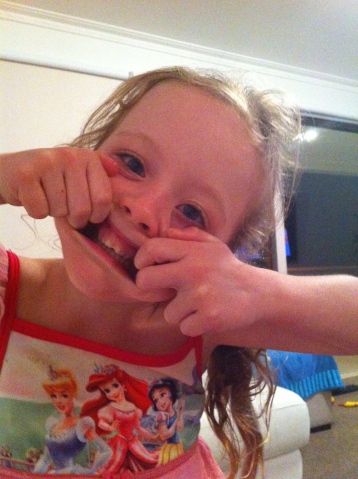 How can she not make you laugh?

Already taking selfies at the age of 6. I need to give her the same tip someone gave me – hold the phone up high to get rid of that extra chin!

4 thoughts on “6. Telling my daughter I have cancer”